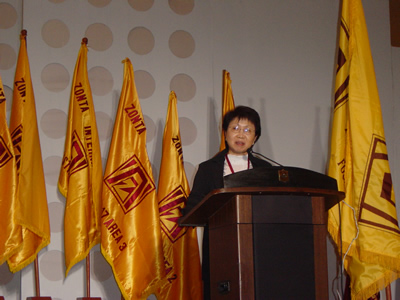 The 12th Zonta International District 17 Conference Five Zontians from our club attended the 12th Zonta International District 17 Conference held at Manila, the Philippines from 10-12 October 2003. The theme of the conference was “Together, Let’s Make Waves”. More than 500 Zontians from the District attended the conference. Through business sessions, workshops and various activities, we worked hard together to further the Zonta cause. At the same time, we enjoyed our fellowship among sister Zontians.

We were delighted that Zontain Betty Fu was elected Area 2 Director, while Zontain Mabel Mak conducted the “Save the Earth or Perish” workshop, one of the three workshops in the conference.

We were also proud that our “Zonta Health Van” won the District Service Award. It was a breast cancer awareness project organised by all Zonta clubs in Hong Kong, in conjunction with the Hong Kong Federation of Medical Societies Foundation Ltd..

The conference finished on a high note with the “All Asian Fashion Show”. Area 2, represented by Zontians from Hong Kong and Kuntan, showed off our national costumes. Sister Zontians followed the tastefully selected music, breezed along the catwalk with confidence and grace, and were just adored by the audience. 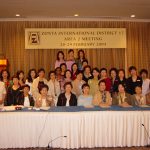