This has been a very fruitful biennium for the Z Club at Sacred Heart Canossian College. In line with Zonta International’s objective to “Enpowering Women through Services and Advocacy”, a diversified range of activities were organized. Internationally, to serving women in Cambodia; locally, to raising students’ awareness of social issues, in particular, gender equality within the community and worldwide; and to helping their fellow students in career exploration in the future. Their project was so well accomplished that it was awarded as the winner of the International Emma Conlon Service Award 2019.

In November 2018 and 2019, they organized two service trips to Cambodia. Main objective was to empowering women in Cambodia with health and wealth, implementing the concept of gender equality, and the right to “Say no to child marriage”.

Cambodian women were taught on how to take care of their own personal hygiene through workshops, from brushing their teeth to washing their clothes with baking soda; improving living standard through science by building eco-coolers that improve home ventilation; and raising income by selling “re-usable sanitary napkins” that they could easily produce.

In school, services including :

Post-service sharing sections were organized for their fellow students.

During the International Women’s Day ( Zonta Rose Day) 2019, they had a booth at the school fun fair to exhibit what they did in Cambodia and had thematic interactive games and souvenirs to introduce and promote Zonta’s missions to participants.

In March 2019, career talks were organized for Form 3 to Form 5 students to explore different career prospects in the future. Zontians were invited as speakers.

In April 2019, Z club members attended the Legislative Council mock debate to raise their awareness of

On the 26th of June 2019, a movie sharing of the film “My Voice, My Life” was organized for Form 1 students so they learned of situations of the less fortunate around them.

The Z Club of Heep Yunn School, being a comparatively young club, had done so much within the biennium in providing services and activities for schoolmates to understand more about social issues, in particular gender inequality in the world.

In School, to commemorate the centennial birthday and echo with Zonta International’s theme on “ Say No to Child Marriage”, posts with the theme message were posted onto the club Instagram.

Thematic folders and post-its stickers were distributed to fellow students and teachers to raise their awareness of the issue in other part of the world.

Making good use of social media, Heep Yunn Z club celebrated International Women’s Day with “EachforEqual” post challenge in the club Instagram to arouse awareness of the issue to their followers.

Forums on the issue of gender inequality were organized during lunch times.

Inspired by the documentary “What stands in the way of women being equal to men? ” produced by the BBC News, and the discussion that followed lead students to have a much deeper understand of the issue.

Screening of the movie “My Voice, My Life” allowed students to have an insight of some local social issues around them.

For the community, joint schools services were organized for the underprivileged in the community. Project ‘Eclairer’ during Easter 2019 was to help children of single parent families.

A 2-days service was organized for elderly in Senior Care Home during Christmas 2019.

The Outstanding Z Girl award, proposed some years ago will be officially launched this year. Proposed awardees will be nominated by teachers from the two schools. Winners will be announced in September of each year.

We would like to express our heartfelt gratitude to the Principal of Sacred Heart Canossian College Sister Veronica, teacher advisors Ms Elizabeth Choy, Ms Nancy Chow; and the Principal of Heep Yunn School Ms Bella Leung, teacher advisor Ms Katherine Hui for their tremendous support over the years. Without their guidance, the Zonta Z club project could not be made possible. 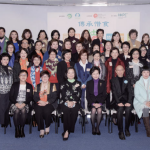