The 30th Anniversary gala dinner was held at the Conrad Hotel Hong Kong together with our biennial fund raising event. Gracing the occasion were our District 17 Governor Georgitta “Beng” Pimentel Puyat, Lieutenant Governor Winnie Teoh, Parliamentarian Kathleen Yip, Mrs. Peggy Lam our Honorary Advisor, Presidents and sister Zontians from the 6 clubs in Hong Kong. There were about 400 guests and Mr. Raymond Young, Permanent Secretary of Home Affairs was our Guest of Honor for the evening.

The dinner started with songs from our Z Club girls of Sacred Heart Canossian School. As president Margaret Chan said “Over the past 30 years, our club has made every effort in upholding the spirit and goals of Zonta International in advancing the status of women and serving the community”. 17 past presidents were on stage to witness flashback of past 30 years of achievements. Mowana Tse our Charter Member and our Honorary Advisor Mrs. Peggy Lam were awarded for their 30 years of dedication to Zonta Club of The New Territories.

Our guests spent an unforgettable evening with presentation of Hong Kong Lifestyle and Creativity Award to 12 awardees, solo performance by Zontian Paddy Lui and group singing performance by our Zontian singers Mowana Tse, Yvonne Chua, Pasy Ip, Rose Chung, Janice Choi and Cindy Young. Guests brought home with their handful of gifts from raffle draw, table prizes and door gifts. But the most memorable of all was a pretty and chic Zonta card box. All the pictures on the cards were printed from the best paintings of six Zonta artists: Jackie Ma, Eva Chan, Betty Fu, Elizabeth Au, Shirley Chan and Anne Chen.

The whole evening programme was conducted seamlessly by the two masters of ceremony Angela Ng and Marisa Kwok. There were many active participants during the silent and open auction events. The anniversary dinner ended with a birthday cake cutting ceremony and all members and VIP guests were on stage with District Governor Beng.

Looking forward to another 30 glorious years for Zonta Club of the New Territories!

We had a record breaking fund raising campaign, supported by many generous sponsors and donors. All proceeds raised from the event will go towards our Club’s Charitable Trust Fund for various projects. 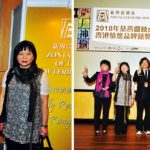 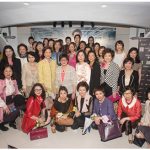