To continue the Zonta tradition and build deeper ties among our Club members, a variety of programmes including recreational and cultural activities were organised by the Fellowship Committee during the last two years. In particular, we have organised two overseas trips in 2015. Enthusiastic attendance was well noted and in certain functions spouses and friends of our members also participated.

In October 2014, we visited the Zen Organic Farm at Fanling. Originally a pig’s farm, it was converted into an organic farm by Mr. Ng and his sister after inheriting it from their father 10 years ago. During our visit, we were given a comprehensive tour which was both interesting and educational. We enjoyed a delicious lunch at the canteen which included roast pig, fresh organic salad, vegetables and self made pizzas. 35 Zontians, family members and friends participated and we left with bundles of organic products.

In February 2015, a spring dinner party was held to welcome the year of the ram. Gathering at the Eatwell Restaurant in Tin Hau, 28 Zontians and spouses joined to have a nice evening of great company, laughters and delicious food. Memorable moments indeed.

In May 2015, a 4-day trip was organised to Shanghai and Hangzhou. Despite bad weather and pouring rains, we had a most enjoyable time shopping, trying out different types of fine restaurants, visiting art museums, civic centre as well as new and old heritage buildings. It was truly a fun and memorable trip. Special thanks to Teresa Lin who gave us all those good tips for the Shanghai itinerary. 12 Zontians participated.

Due to popular demand, we re-visited South Korea in October 2015. We took a good glimpse of the Busan’s autumn colours at two famous monasteries ( 海印寺, 梵漁寺 ) and spent a whole afternoon at the world’s largest shopping mall (Centum City). In addition, we walked through the Oryukedo sky walk, enjoying the beautiful sea view of Busan. On the last day, we visited the amazing Gan Dong Cultural Village, followed by strolling down the national open market where we had the opportunity to buy and taste local snakes. Special thanks to Cindy Yeung for making the VIP tour arrangement. 17 Zontians, spouses and friends joined and we all had a wonderful and memorable time.

In November 2015, we visited the Tsz Shan Monastery in Tai Po. Built with the Tang Dynasty style of architecture, the monastery sat prominently on the hill side with breath taking views. A popular destination for locals and tourists, one can still feel the elegance and tranquility in the monastery. 39 Zontians, family members and friends participated in the tour, followed by a delicious veggie lunch at the monastery.

In July 2015, a Do It Yourself perfume class was arranged by Lili Tsang. 10 members participated in a joyful afternoon producing various fragrances of perfumes.

In January 2016, a dinner was held at the Xi Yan Resturant ( 囍宴 ) to celebrate the success of our bi-annual fund raising event need in October 2015. At the dinner, we thanked Jacky Yu, owner of Xi Yan for the wonderful menu he designed for the fund raising dinner which won numerous praises from many guests. A total of 25 Zontians participated.

In February 2016, we had a dinner gathering to welcome the lunar new year. By popular demand, it was held once again at the Eatwell restaurant. Another great evening with 22 Zontians and spouses to celebrate the new year of the monkey. 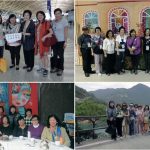 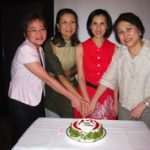