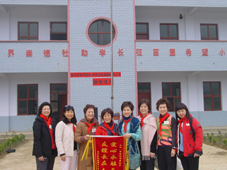 Visit to 貴州省 清石新界崇德社助學長征苗圃希望小學 – April 2005
Through the Sowers Action in 2003, the Club contributed HK$189,036 to sponsor the construction of a primary school in a remote part of Guizhou in the Mainland. The building was completed in December 2004 and was later named 清石新界崇德社助學長征苗圃希望小學.

Ten Zonta NT members and one family member, together with a member from Sowers Action visited the school in April 2005 and participated in the naming ceremony of the school. They also brought with them gifts of stationery and electronic appliances for the students and teachers of the school.

Sponsor of the Employment Development Services Centre in Yuen Long
Recognizing that unemployment is a major cause for lack of harmony within families and the community, the Club donated $400,000 towards the setting up and running of Zonta Club of The New Territories Employment Resources Centre in Yuen Long, the district with the highest unemployment and underemployment rates in Hong Kong in 2005. The Centre provides vocational training facilities and courses designed for the unemployed of low skill and education, namely courses for domestic helpers, rehabilitation and elderly home care helpers, etc. The Centre has been operated by the Hong Kong Employment Development Services Limited since early 2005.

Home repair & maintenance for the needy Single Living Elderly
The Club donated $120,000 for minor home repair works carried out in 720 single / couple elderly families. The works, although of minor nature like fixing a loose screw, replace door handles, adding a grab bar over a water closet, fixing broken floor tile, change a light bulb, etc, have vastly improved the safety and daily convenience of the elderly. We are only able to help so many families with the support of professional volunteer workers organized by the Continuing Care Team of St. James Settlement.

Shek Kip Mei Lutheran Centre for the Blind路德會石硤尾失明者中心
The Club donated HK$31,752 to the centre to support the purchases of necessary equipments. The Club has given continuous support to the centre since 1980’s.

Society for the Promotion of Hospic Care Charity Concert
The Club donated HK$10,000 to support the concert which was held on 3 December 2004, sponsoring a number of elderly people from nursery homes to attend the concert.

Day Camp for PLK & SCH children and minor ethnic group families in January 2005
The Club donated HK$10,110 for underprivileged children and their families to enjoy a day’s sport activities and lunch in the camping sites of the Hong Kong Adventurist Corp in Sai Kung Man Yee Reservoir. Almost 80 children, their parents and teachers were entertained by volunteer cadet coaches of the HK Adventurist Corp, our long-term participating partner for this activity.

Provide hot water heaters for the Elderly
The club donated electric water heaters and have them installed in 30 single and couple elderly families. This project is another that helps improve the safety and convenience of the elderlies daily living..

Sponsor the Employment Resource Corner of the Tin Shui Wai Women Assoication Centre
The Tin Shui Wai area is known for its family and employment problems. To help alleviate these problems The Club donated HK$50,000 to the TSW Women Association in support of their employment skill improvement installations and activities in their new Centre, which started operations in first quarter of 2006.

Evangel Children’s Home
The Club donated HK$50,000 to support the Evangel Children’s Home in publishing 10,000 DVD copies to celebrate their 50th Anniversary. The purpose was to disseminate their services and promote the concept of inclusion of the underprivileged in the community. Premiere of the DVD was held on Sunday 12th March, 2006 in Chiang Chen Studio Theatre, Hong Kong Polytechnic University.

The Club also sponsored $30,000 for 350 women to participate in a self-taught training programme organized by the Open University. 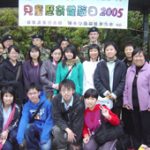 Next:
Report from Membership and Classification Committee (2004 – 2006)