The Golden Z Club of the Chinese University of Hong Kong continued to work to achieve the goals of Zonta International through services and advocacy.

Promotion of goals and objectives of Zonta International and Golden Z Club; and to raise awareness of members of the university on different social issues at the Art Fairs in September

Care for the aged and deprived children through :

To work in line with Zonta International’s movement on “Zonta Says No Against Violence”, they participated at our Club’s “Say No-Step Out” press conference in November 2014. Followed with the “Cookies Drive to End Violence Against Women” project to raise fund from selling cookies made by disabled people of iBakery; proceeds raised were donated to Harmony Link to support their services to woman and child victims of domestic violence.

Cookies charity sales were held at university campus in March, in December within the 16 Days of Activism, and at our Club’s “Truffles Epicure Charity Dinner” in October.

The project won the third prize of the District Governor’s Outstanding Services Award at the District Conference in Bangkok in September 2015.

To further promote Zonta International’s “Zonta Says No Against Violence” campaign, “Zonta Says No” file folders were distributed to staff and students of the university to raise their awareness of the issue.

On top of their own service projects, they served as helpers at our Club’s fund raising “ Truffles Epicure Charity Dinner”.

They also took part at the joint-clubs Legco Mock Debates. 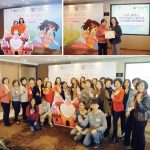