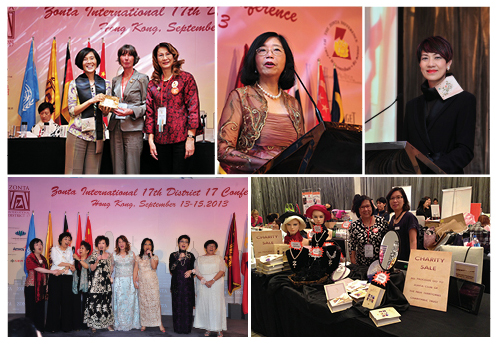 The 17th District 17 Conference was held in Hong Kong from 13 to 15 September 2013. Our club participated actively in the organization of the conference, responsible for the pre-conference and on-site registrations of participants, as well as the closing dinner. More than seventy percent of our members attended the Conference.

The conference opened with a Flag Parade by all the clubs within District 17, and a keynote speech by the Chief Secretary of the HKSAR Government, Ms. Carrie Lam.

During the Business Sessions, Zontian Winnie Wong of our club was elected Area 2 Director for the 2014-16 biennium, an honour truly well-earned.

Zontian Christine Fang of our club was invited to speak on ‘Sustainability of Service Projects’ at a workshop moderated by our Elizabeth Law. President Patricia sat on the panel sharing with the participants our club’s women empowerment project for ethnic minority women pursuing tertiary education.

During the Conference, our club also took up a booth selling scarves designed by Zontian Mowana Tse and hand-embroidered by ethnic minority women trained under our sponsorship. These scarves won immense praise from Conference attendees. We also managed to raise a good amount of income for the ethnic minority women involved in the project.

The closing ceremony featured a series of entertainment programmes, including a Cultural Extravaganza showcasing the talents of Zontians from different districts, and ended in a finale of Auld-lang-Syne led by the singing talents of our club. 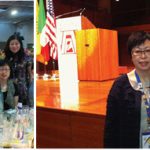 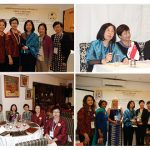 Next:
Area Meeting in Kuala Lumpur